A network fault can be as obvious as a failed network port. It can also present less obvious symptoms such as an inexplicably slow network, intermittent loss of network connectivity on computer systems and poor voice quality on telephones.

Our technicians are experienced in identifying and resolving faults in wired and wireless networks. 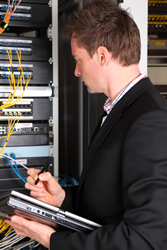 In addition to looking for failures that have occurred in the network system and devices that have reached capacity, we can also consider the overall architecture of the network and the demands being made on it. A network designed many years previously may need to be updated to cope with the demands being made on it today. As an increasing range of devices are made able to use standard IT networks as their communication path of choice, there can be an assumption that there is infinite capacity within the network to accept additional traffic which is not the case.

Active monitoring can be put in place to alert our technicians directly to faults as they occur. This can be especially beneficial to organisations with networks that span multiple sites.

This website uses cookies to improve your experience while you navigate through the website. Out of these, the cookies that are categorized as necessary are stored on your browser as they are essential for the working of basic functionalities of the website. We also use third-party cookies that help us analyze and understand how you use this website. These cookies will be stored in your browser only with your consent. You also have the option to opt-out of these cookies. But opting out of some of these cookies may affect your browsing experience.
Necessary Always Enabled

Any cookies that may not be particularly necessary for the website to function and is used specifically to collect user personal data via analytics, ads, other embedded contents are termed as non-necessary cookies. It is mandatory to procure user consent prior to running these cookies on your website.